Covalent layer lattices
•A large number of atoms are covalently bonded together to form a 2 dimensional layer lattice. Example: Graphite, C
•The layers are held together by weak dispersion forces.
•Each carbon atom is covalently bonded to three other carbon atoms.
•The network structure contains delocalized electrons.
Properties of Graphite:
1.  exist as a solid with a high melting point (strong covalent bonds between atoms)
2.  conducts electricity due to presence of delocalized electrons.
3.slippery to touch (weak dispersion forces between layers allow layers to slide past each other).
4.soft

Amorphous forms of carbon
•These forms have no consistent structure.
•Examples- Charcoal and carbon black.
•Can be formed from combustion
•Properties
-Conductive
-Non-crystalline
-cheap 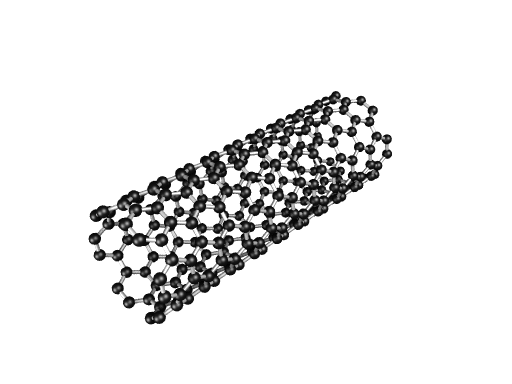 Carbon nanomaterials
Carbon nanomaterials are carbon allotropes with a cylindrical nanostructure.
Types:
1. Fullerenes (Buckyballs)
•The Fullerenes are an allotrope of carbon, the atoms are arranged in connecting pentagons or hexagons.
•They have a high surface area to volume ratio- better properties.
•They have a high tensile strength and high electrical and heat conductivity.
2.  Graphene
• Graphene -a single-layer of graphite.
•It is soft due to weak dispersion forces between its layers.
• Good electrical conductivity
* Is an extremely strong and tough material
3. Nanotubes
•Closely related to graphene.
•They have a long hollow structure with walls formed from graphene.
•They have:
- Good electrical and thermal conductivity
-strong forces of attraction between each other
-strength