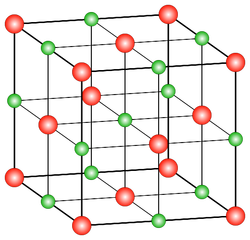 THE IONIC BOND
•Ionic bonding occurs as the result of a metal atom donating its outer shell electrons to a non-metal atom.
•The metal becomes positively charged -->Cation.
•The non-metal becomes negatively charged --> Anion.
•When combined they give a chemically neutral compound called a SALT. Salts are hard and brittle.
•Ionic compounds have particles that are arranged in a regular pattern -->they are CRYSTALLINE

Image- wikimedia commons
PROPERTIES OF IONIC COMPOUNDS
MELTING AND BOILING POINTS
Ionic solids have very high melting and boiling points due to the strong ionic bonds in 3 dimensions which require enormous amounts of energy to  overcome the bonds.
Eg. NaCl- mp  801 ^o C,  bp 1465^ o C
LATTICE ENTHALPY
Lattice enthalpy (energy) is the measure of the amount of energy required to disrupt the ionic lattice and render the crystal into its gaseous ions.
Eg. NaCl à  780 kJ mol^-1
PHYSICAL CHARACTERISTICS
Ionic solids are very hard and brittle.
Hard due to the strong bonds.
Brittle since when distorted like charged ions move closer to each other and the strong electrostatic repulsions shatter the crystal.
CONDUCTIVITY
•Ionic solids cannot conduct electricity.
•Ionic liquids (solutions and molten) are excellent conductors of electricity.
This is because the IONS are free to move when they are not in the solid lattice.
A liquid that conducts an electric current is called an ELECTROLYTE.